I was playing around with things in my inventory, While wearing this hair by Wasabi Pills called London. This hair can be found at the Ultra Event. I am also wearing Zibska eyeshadow called Rheta and Zibska lip applier called  Viane Lips. These both can be found at the Cosmetic fair  These Horns I happen to pick up at some event in some time frame and well I don’t remember where or when it was but I had this picture Idea in my head when I saw these horns. It has taken me some time to put it together but here it is. The butterflies are by Una. Something else I picked up in some event at some point in time but all the credits are below thanks for browsing my blog.

Zibska has a really awesome hunt going on in her store right now. In this shot I am using  1of 10 hunt item called Avarel these shoulder pieces have a hud to change the colors and also come with a neck piece that is not shown. The headpiece is also in the hunt the two toned flowery headpiece is the 6 of 10 hunt item and is called Verend. This piece also has a Hud to change the colors to fit with any scene or outfit. The Aika Lips appliers by Zibska  were made to be used with catwa, lelutka, omega and Tmp and  can be found at the Cosmetic Fair it goes through September the 30th, 2016 something to most definitely check out. 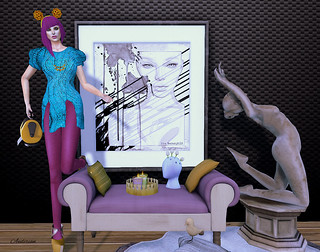 lately I’m feeling a little more stretched thin than normal, just kinda don’t know if I’m coming or going.  Lots to show and I kinda feel like there’s not enough time in the day to show it all. Have you ever took on a project and were totally stoked about it and then after its all said and done and your own your way to start on things, something just changes and your not so into it anymore.. I’m thinking this has been my main problem. pressure and the attitude’s of others affect me probably way more than they should. It can really just make things less appealing for me. its almost kinda like when you see a store front on a street and think oh what a nice store and then you decide you will go in a check out whats there and then it looks like nothing like their window display , or for a really good example I’m gonna go old school and bring up pretty woman, the one scene  where she has all that money she goes in to spend it and buy a dress and all the women snub her cause she isn’t in their normal class, clique, of the the step ford house wive clones.lol . I will be the first to tell you I know I’m stubborn but I think that people in this time in age could use to be a little more friendlier, kinder and appreciative that others try to be different.

I’m a little spacy today.. just all over the place..  I’ve got a lot of ideas but not enough energy or brain space to get them all done ..lol Anyway,  in my Blog today I’m going to talk about a new store that is new to me and well their items are impressive, I really can not wait to see what this person puts out next.. I’m excited !!!

The ever So lovely Tempest Rosca , happen to pass me a note card to check out this new place called Machoire . The creativeness that is shown in this designers work is just so awesome !  I get a very Fantasy like inspiration from the Hat my Avi is wearing is called the Ellar hat By Machoire of course and it comes in 5 color packs : black, blue, brown, red, purple.  I didnt choose the color blue , Machoire passed this color over to me I guess he thought I liked Blue since I have a lot of blue pictures ..lol Well I do like blue .. but I like other colors too just not as much as blue.. 🙂

“We don’t get to chose what is true. We only get to choose what we do about it.”
― Kami Garcia, Beautiful Darkness

The Dress I’m wearing by Topazia is actually  different pieces of the same style dress  the base dress is the Sharlene in black along with the short cape in black with the long cape from the Sharlene set in blue,

There are really endless options to mix and match with this dress style. The head piece is from zibska at an Event called the Tales of Fantasy and is open til Novemeber 3rd So go check it out!

Today has been a bit of an eventful day, The next two weeks in neck of the woods my children are having grandparents days, where their grandparents get to come have lunch with them . So today my mother n law and I set out to do something special,we went to go get the kiddo a happy meal and set off to Have a great lunch. Which it was , its always a treat to meet new kids that you hear so much about  on a daily basis. So many fresh new faces that don’t have a care in the world its very refreshing. Do you guys ever look at kids you have in your family or the friends of your kids and think , I wonder what they will do with their life? I do but I’m also just a curious person by nature.  The kids in my little lou lou’s class was asked to tell what their grandparents do. Their were so many amusing stories, all from the mouth of babes they say. However my little ones pictures and story was quite different  as she told of how her grandpa was dead and that one of them is not and that we only just talk to him. This made me think more into , do you ever just wonder what your kids think about? What really has affect on their lives?I really don’t think at the age of 4 you should have to know this kind of pain. I mean yes she backed it up with cute antics but still it was the first thing out of her mouth. I also had never thought that having a family member long distance would have a place in her minds either. What I’m getting at is We all must really start making more memories that are good with the people that we have in our lives. rather than remember so much of the things that didn’t go so well. Its a proven fact that we remember more bad things over good ones, because its more traumatic it affected you more emotionally.  I don’t know maybe i looked into that to much, but kids also don’t know how to effectively express themselves not when they are that small .. maybe I’m just a worrying mother.  Anyway now since I’ve spilled my guts on my blog o.o

Today is a new round starting at a place called the Body fanatik, they have 5 main designers and 2 guest designers. I’m currently wearing a skin called Vamptress no brow skin, So i just added other brows so they would match my hair , The skin is by Lagniappe. It has many different pack options for the slink physique , visage head , slink and feet appliers and the wowmeh body.  This skin also has 3 different face options and 12 skins total to pick from.

I’m wearing another one of topazia’s dresses like the one I wore in my last blog , just in a different color. The eyelashes are by zibska and are at the Cosmetic fair! I have more to come from the cosmetic fair soon!

Here’s a better view of the Sompti Topazia Dress in Red . Also I’m wearing a hair by a Newer store called Entwined I really love this color. its so pretty.

Thanks for stopping by and checking out my blog!