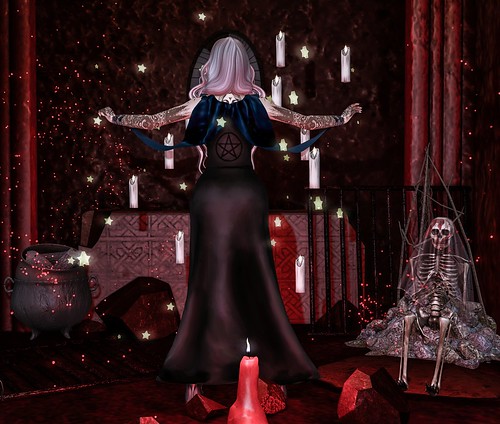 This is not exactly what I had in mind for this picture but after re taking it several different times this is what I am settling on. I am wearing a Steampunk outfit by Wicca’s Wardobe who also did a Collaboration with enfant terrible So really this is by Wicca and leenfantterrible. The litte dress called Joyce comes in two parts a Corset top and a little skirt, it also comes with Goggles , necklace and upper and lower Arm jewelry. I am wearing this with the Maitreya body.This outfit comes with a hud where you can change the bralette part of the corset and the little frill on the skirts color.  The boots I am wearing are by Wicca’s Wardrobe they are called celestine boots I am wearing a Plain pair but they come in a Tartan pack also,  both packs have a hud where you can change the eyelets of the boots and the little decorations from silver or gold. Also you can change some parts of the boots colors. I paired this boots with some Over the Knee Socks By avi candy in Maroon, This to has a hud and has several options for a maroon type color and some of the options have little hearts at the top of the socks. These will be at the up and coming of Anybody.. Shh I kinda got these before anyone else..lol. Hair is by the ever so talented Taketomi, they are always making such cute and interesting hairs.  Last But not least while trying to find a steampunk themed place, I just happened to ask about something steampunk themed and I was asked if I had been to Ex Machina and seen their clock tower, which I had seen this before but just had forgotten about it, This is a skybox it has two levels its very well textured and it has this neat little thing it has a light switch and You can turn all the lights off which is what I did so I could use my own lights for pictures, I really think that this skybox is a really nice addition to your pixel collection. You can decorate it steampunk like or even go very modern with it and  just cant beat that clock window.Thanks Hattie Panacek for letting me Review your Creation!

Six years ago when I started Second life I never thought that I would do as many things as I do in world. I Never thought I would know as many people from so many different places around the world. Between My work doing magazine shoots for Magazine’s and doing Blogger Manager work and over all just the social networking I do to Keep up with events and People sometimes astounds me. Indie teepee has turned out to be an awesome little project and I have met so many wonderful people.