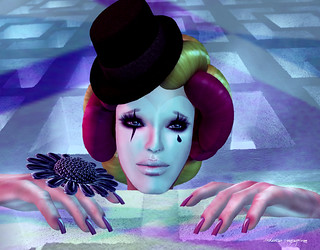 Hi, Have I ever told you I’m not really fond of clowns? they kinda creep me out. When I was 3 years old I was adopted by my biological mother’s parents. For whatever reason my Nana had decided she was going to decorate my room in clowns. I think maybe this is the reason why I dislike them, I mean Have you ever lived in an older house and at night they kinda settle and creak and the pipes and heating systems make odd sounds?  As a house settles it makes things maybe shake or settle to or I could have just been so small and not realized we were having some sort of small earthquake.. lol but still.  Most of the clowns in my room were music boxes. Do you know what its like to wake up to a clown playing music and slowly moving around?  Yea well I do..lol  I have kind of had a change of heart as clowns are really different these days. If you want to look up what I mean check out the Barnum and Bailey circus 2015 clowns. They use such bright colors and tutu’s an awesome stockings and converse and they just look cool and less creepy. Some of them have the traditional face makeup but they still have a new twist . I did this picture in Favor of the new style clowns and then i seen this picture on a fashion blog called fine fettle and decided to take some inspiration from it . You can get the Hair hat combo by Azoury at the Alice in Sexyland Event, The makeup is by No7 and you can find it at the June Event of The Instruments. Nails are by Alska metro, her nails are about the only kinda I wear now in world. The huds she creates are just easy to use and keep up with. The ring is an older item by Maxxi Gossamer called Shanghai Daisy Flower ring.

Makeup: no 7 Le poppet @ The Instruments

2 thoughts on “Stuck in a Maze”